In the winter of 2016, California prisoner, Donald “C-Note” Hooker, received local and national press (People), for his participation in the play he starred and co-wrote, Redemption In Our State of Blues. In the spring of 2016, he participated in his first Prison Art exhibition. Through the Wall: Prison Arts Collective at the CB-1 Guest gallery in downtown Los Angeles. The exhibition was a first of its kind in the Prisoner Art World. Curated by the University of California, San Bernardino, it consisted of the works from prisoner-artists from two Southern California men’s prisons and one Southern California women’s prison. CB1 Gallery co-founder, Clyde Beswick, had spent time behind bars himself. In the summer of 2016, C-Note exhibited at the Escaping Time, Prisoner Art Exhibition on Governor’s Island in New York City. He was asked by the curator to create poetry for the insides of gift cards made from some of his artwork. This led to the creation of the Paintoem (painting + poem).

In the Prison Artworld, there is a demand from curators to showcase both the literal and the visual. Because Prisoner Art exhibitions are a way to showcase the “Prisoner’s Voice.” With his roots in painting, poetry, and exhibiting, C-Note was able to envision a way for Prison Art curators to visually serve this dual purpose. Paintoems are digital works of art that consists of an original painting or drawing, combined with a poetry vignette. This digital combination is then given away to the public for their free use. So long as, the poet and the painter are given acknowledgement for their creation as part of this free content for public use. He wanted to make sure grassroot activists had access to art, without getting in trouble with artist’s copyrights. Paintoems are works created under a Creative Commons (CC) framework. This was before he became aware of the CC.

In the summer of 2016, the quarterly newspaper, California Prison Focus, published a groundbreaking work. It was an exposé on the hundred and seventy-five women serving a sentence of life without the possibility of parole at the Central California Women’s Facility (CCWF). The world’s largest female prison. What made this piece so special, it wasn’t written by CPF staff, but vignettes from the words of the women themselves.

While CPF arose 28-years ago in response to reported abuses in California’s Security Housing Units (SHU), in particularly Pelican Bay State Prison, it has since become national in reach. In one of California’s men’s prisons, a prisoner was profoundly impacted by this story. That prisoner was C-Note. He began by asking the male prisoners that he was housed with, if their experience were similar regarding the state’s position on denying LWOP’ers rehabilitation services. After confirming this was true, he then wrote a play, Life Without the Possibility of Parole (a prison play), https://mprisondpoetz.wordpress.com/2016/12/18/life-without-the-possibility-of-parole-a-prison-play/. Inspired by the CPF article, it weaves a tale of injustice when LWOP women voluntarily organize an A.A. self help group. This spawned a paintoem of the same title, https://mprisondpoetz.wordpress.com/2016/11/11/life-without-the-possibility-of-parole/. It should be noted, that paintoems stem from two actual distinct works of art, a painting and a poem. 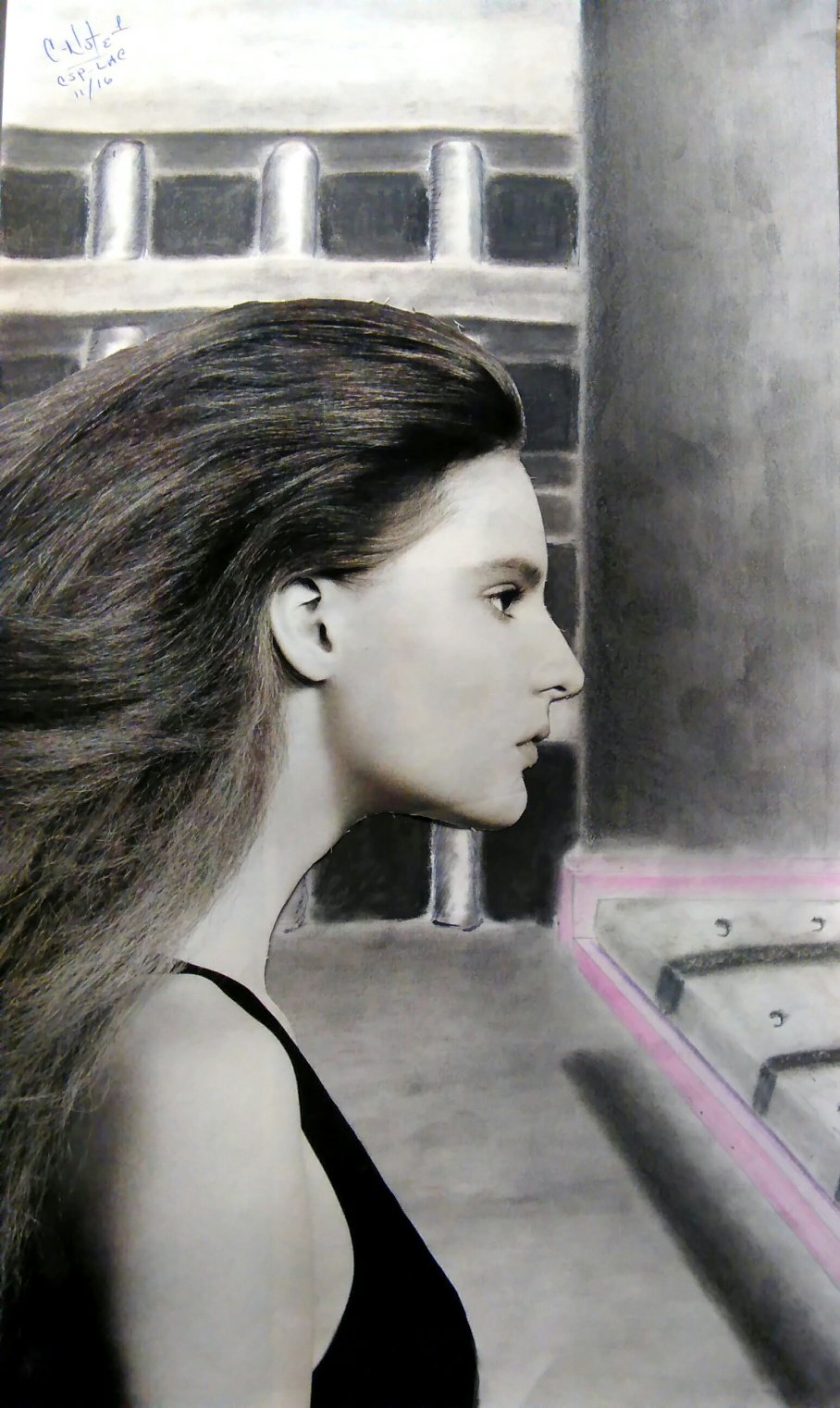 C-Note’s 2016 painting “Life Without the Possibility of Parole”

While going through his notebook, C-Note discovered an earlier poem he had written prior to the one used in the paintoem, Life Without the Possibility of Parole. This prompted him to create another paintoem, and it would require him to do a painting. He told Mprisond Poetz his process in 2016.

Eyes Without A Face, is the prequel to the paintoem, Life Without the Possibility of Parole. Apparently I had already written a poem for that Paintoem that I wasn’t aware of,” says C-Note. “I felt this poem published by itself is bland. So I had to come up with an image. I used a photo from Orange is the New Black, whited out their faces on the theory of the nameless-faceless people. I’m working on another piece in which the piece’s title comes from a classic song. I left the eyes for Billy Idol’s, song, Eyes Without A Face, and that would represent the nameless-faceless 175+ women serving a prison sentence of Life Without the Possibility of Parole (LWOP), at the Central California Women’s Facility (CCWF).

The artist has donated his painting, Eyes Without A Face, and will be made available to the public to purchase December 7th, during a silent auction to raise funds for the California Prison Focus, and San Francisco Bay View newspapers in Oakland, California. Both newspapers are leaders in providing press coverage from behind the wall. 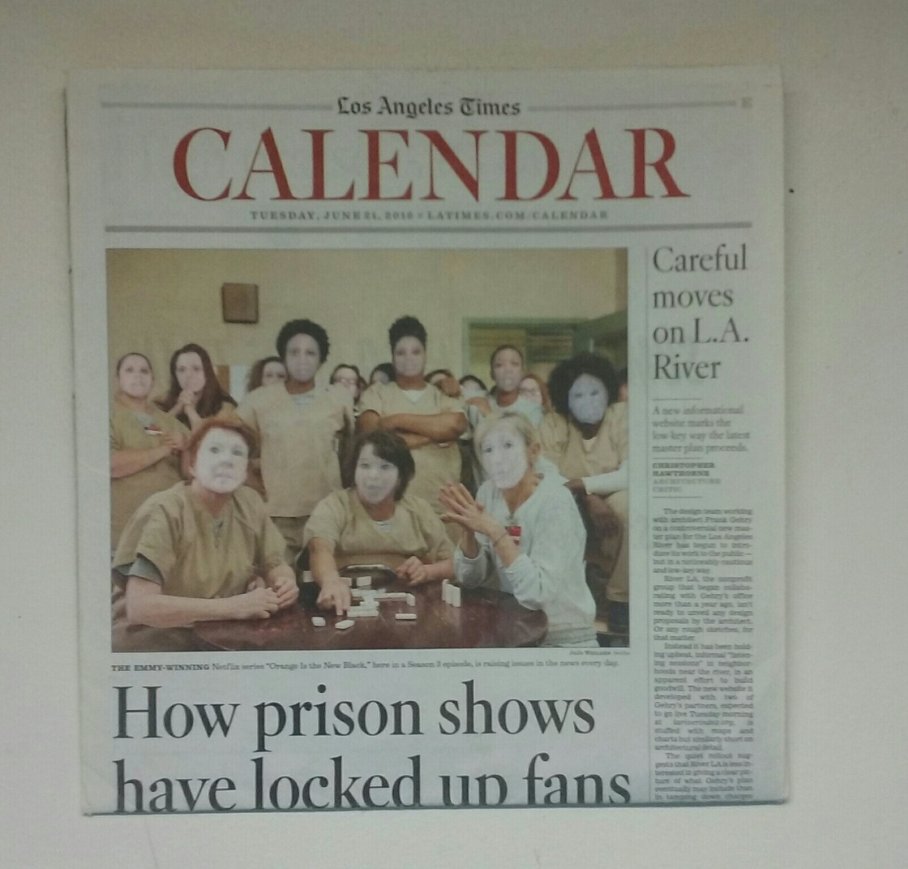