In light of mass gun violence in Dayton, Ohio, and El Paso, Texas, we at Darealprisonart thought it would be a public good as a reminder that resolutions to gun violence could be found in America’s prisons 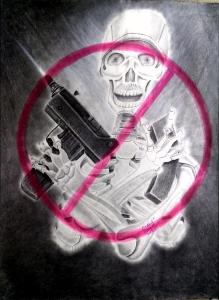 No More Massacres is a collaborative work of art, between imprisoned poet, Darryl Burnside, and the world’s most prolific prisoner-artist, Donald “C-Note” Hooker [1]. Imprisoned for life at 16, Burnside had been greatly affected watching year after year, teens and pre-teens gunned down through mass gun violence.

Here are excerpts from an interview we will be publishing about Burnside’s poem, No More Massacres, his work in the Arts, and as a youth restorative justice leader.

DRPA: You wrote No More Massacres [2], tell us what that was about?

DB: Well, you see what’s going on in the world with Parkland, but for me, my journey began in 2008 in Pelican Bay. That’s when I saw the shooting of congresswoman Gabrielle Gifford, and the death of Christina Taylor, the little girl that was present.

DRPA: We thought your story was interesting. Here you are imprisoned at 16, the same…

This site uses Akismet to reduce spam. Learn how your comment data is processed.